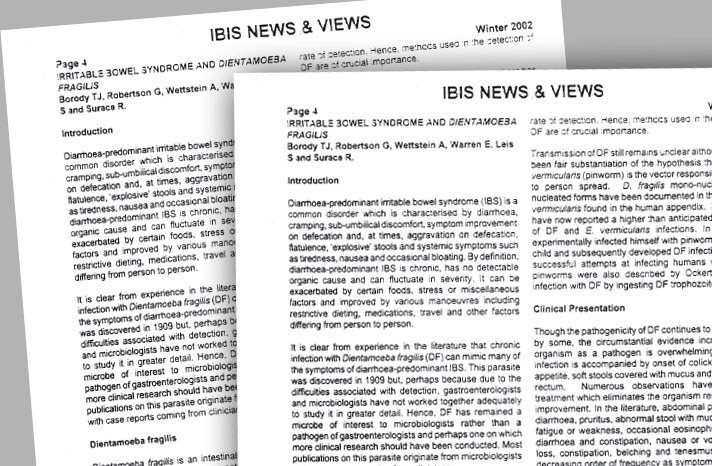 Diarrhoea-predominant irritable bowel syndrome (IBS) is a common disorder which is characterised by diarrhoea, cramping, sub-umbilical discomfort, symptom improvement on defecation and, at times, aggravation on defecation, flatulence, ‘explosive’ stools and systemic symptoms such as tiredness, nausea and occasional bloating. By definition, diarrhoea-predominant IBS is chronic, has no detectable organic cause and can fluctuate in severity. It can be exacerbated by certain foods, stress or miscellaneous factors and improved by various maneuvers including restrictive dieting, medications, travel and other factors differing from person to person.

It is clear from experience in the literature that chronic infection with Dientamoeba fragilis (DF) can mimic many of the symptoms of diarrhoea-predominant IBS. This parasite was discovered in 1909 but, perhaps because due to the difficulties associated with detection, gastroenterologists and microbiologists have not worked together adequately to study it in greater detail.

Hence, OF has remained a microbe of interest to microbiologists rather than a pathogen of gastroenterologists and perhaps one on which more clinical research should have been conducted. Most publications on this parasite originate from microbiologists with case reports coming from clinicians.

Dientamoeba fragilis is an intestinal protozoan originally seen by Wenyon in 1909 but was not recognised as a new species until its description by Jepps and Dobell in 1918. For some decades it was thought to be a harmless commensal, despite numerous published reports of illnesses associated with the infection. Although its role as a pathogenic agent remains controversial, DF has been linked to chronic diarrhoea, abdominal pain, nausea, anorexia and excessive flatulence. DF has also been implicated as a cause of colitis in adults.